I was in Berlin this week training 120 developers about Bluetooth Smart (AKA Low Energy) and the new developer tool from the Bluetooth SIG, Bluetooth Developer Studio. It seemed to go well judging by the feedback forms and the comments made directly to me by various attendees. People had come from far and wide to attend and there were people from (at least) Germany, UK, Austria, Italy, Spain, Slovenia and Israel present. Now there's commitment :-)


I'll be delivering the same course again in London in September if you'd like to come along, just before Bluetooth World where I'll be moderating a panel session and also presenting one of the sessions.

Berlin is a really cool city. It's a major European capital and yet manages to feel like a small, quiet and friendly city. I made the most of a couple of spare hours before I was due to fly home by taking a long walk in and around the lovely Tiergarten park and took some fairly pathetic selfies and other photos en route :-) 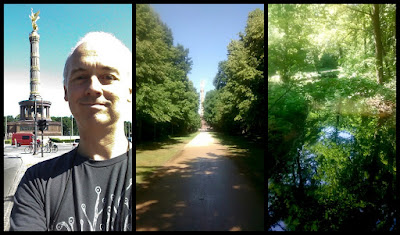