It's 2021 and we're sadly still somewhat in the grip of the Covid-19 pandemic. Travelling near and far to speak at conferences is becoming a distant memory (but one I'm glad about in some ways, if only because it dramatically reduces my carbon footprint) but the conference industry has rallied and "gone online". Last year, many events were online for the first time ever and there was a lot of learning going on. There were teething problems. There was stress. But audiences were sympathetic, watching from their newly established home offices and online conferences went ahead, were well received and lessons were learned.

These days, I'm speaking at on average two conferences every month and we all seem to have a much better idea of what we're doing. Conference organisers have generally got rather good at what they now do and events tend to go smoothly. Speakers like me are enjoying larger audiences now that travel and associated costs and geography are no longer constraints. Perhaps the online event will become the new normal. I personally hope so. The carbon cost of your typical international conference must be off the charts and do we really all need to be physically in the same room to share knowledge and have a conversation? Of course we don't.

For speakers, online events feel very weird to begin with. You're sat in a room on your own, talking to your computer screen with no sense of the presence of any audience, large or small. But you get used to it.

In the past, I've always presented without any form of script. I prepare. I know my subject. My slides provide a framework within which I tell my tale of Bluetooth technology wonders (or something like that!). I get up on stage and do my thing. All good.

But remote presentations at online events have changed my approach. Sometimes talks are pre-recorded as videos. Some conference organisers prefer this or even stipulate this as they see it as lower risk (no fear of broadband issues on the day causing problems). And other times, they're delivered live.

Prompted by fears I might over-run my allocated time slot at one of the events I spoke at last year, I broke with my usual habit and wrote myself a script so that I could be sure I would not go off topic and waste time. This worked well enough but the question as to where you position your script so that you can read it without looking like you're reading a script was an issue. So, I came up with the following solution, which has been working very well for me.

I mount my webcam on a small tripod and place it on a pile of books on my adjustable monitor stand, right in front of the monitor so it is at eye level but does not block my whole view of the screen. I place my Android smartphone on a small tripod too and put it immediately behind the camera and just above it.

My script takes the form of an HTML web page and I download it onto the phone from Google Drive. I long-press the file in the file manager application, select Share and then choose an application that I wrote called BleTeleprompter. This loads the script into the app.

Meanwhile, I have a BBC micro:bit running some simple code that causes Bluetooth control data to be transmitted when I press (or long press) either of the device's two buttons. In my app, after loading the script, I scan for the micro:bit and connect to it. My script appears and.... I can scroll up or down by pressing the buttons on my micro:bit!

So, when I deliver my scripted talks, I am looking slightly over the top of the camera at the script on my Bluetooth-controlled teleprompter. I use my mouse in my right hand to advance my slides and the micro:bit in my left to scroll my script. Simples!

Here's the app in use:

And here's the micro:bit code:

I was a speaker this year's online Droidcon EMEA conference and discussed issues such as the factors which affect application data rate, what really constrains range in Bluetooth communication (and how to increase it) and how Android developers can create applications with which to monitor and control Bluetooth mesh networks.
You can download my slides from here.
Educational resources for developers and other technical roles can be found at the Bluetooth SIG web site in the resources section, here. Note that code for the demonstrated Bluetooth mesh proxy application for Android, iOS and web is available in the study guide entitled "An Introduction to the Bluetooth Mesh Proxy Function".
Enjoy.
Martin 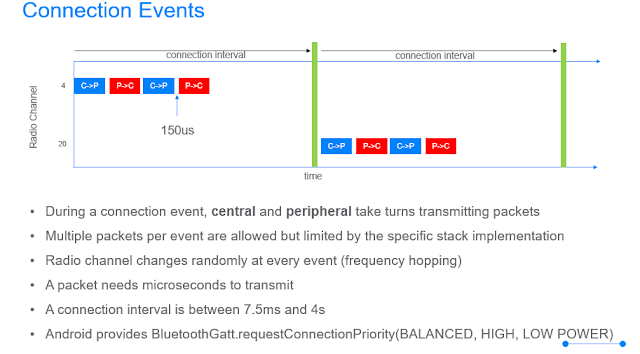 We're in the midst of a global pandemic. People are isolated, working from home or.... just isolated. Conferences everywhere have been cancelled.

But Synesthesia, the company behind the excellent Android developer conference, Droidcon Italy didn't let that stop them. The annual conference itself was rescheduled to 27th/28th November, but to satisfy those of us hungry for knowledge right now, Synesthesia, working with the Bluetooth SIG also launched a series of webinars so that developers could get together virtually and listen to speakers share their knowledge on a range of topics, over the course of the summer.

I've been a speaker at Droidcon Italy a few times and covered a number of different aspects of Bluetooth. Yesterday, I was glad to have the opportunity to deliver the talk I'd created specifically for this year's Droidcon Italy, entitled "Advanced Bluetooth for Android Developers".

I talked about data rate, what it means and how to maximise it when transferring data between two devices using Bluetooth Low Energy (LE). There are various APIs available to Android developers which can be used to exercise key variables in how Bluetooth is working underneath those APIs. I reviewed those variables and the associated APIs and hopefully gave the audience a much deeper knowledge of what's really going on under the hood, what to expect from those APIs and exactly what can be achieved using them. I presented my own test results, where for example, transferring 100k of data took about 10 seconds using default settings but was reduced to about half a second with a larger ATT MTU, faster connection interval, the LE 2M PHY and two devices which support the LE Data Packet Length Extension feature. 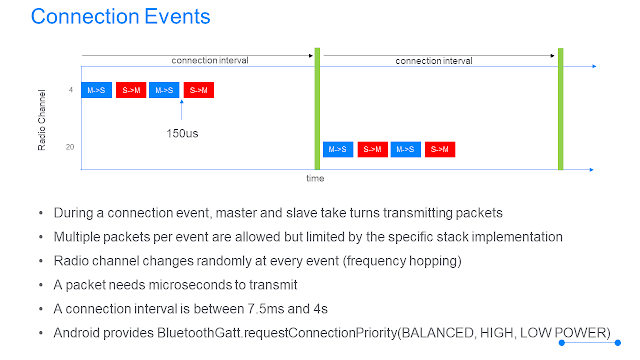 I talked about range. There are many people who still think that Bluetooth has a range of about 20 metres. In fact it's now over a kilometre, especially since Bluetooth 5 introduced the LE Coded PHY, which uses Forward Error Correction to increase receiver sensitivity. Android has APIs that lets you use this feature so that you can maximise communication range. There's some good high level information at the Bluetooth SIG web site about this topic: https://www.bluetooth.com/learn-about-bluetooth/bluetooth-technology/range/  and a deeper review in a paper about Bluetooth 5: https://www.bluetooth.com/bluetooth-resources/bluetooth-5-go-faster-go-further/ 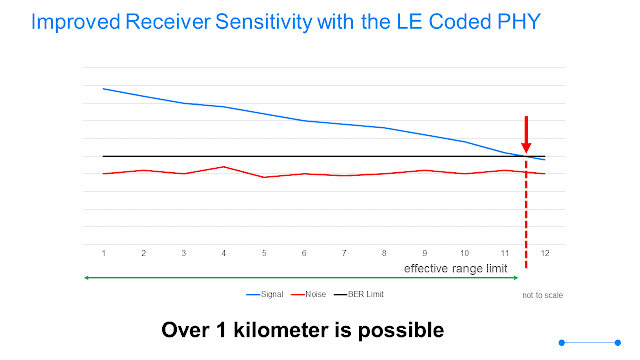 I also explained how broadcasting can be performed with Bluetooth LE so that communication is between one transmitting device and an unlimited number of receiving devices, what Advertising Extensions are, how they work and how they can be used. 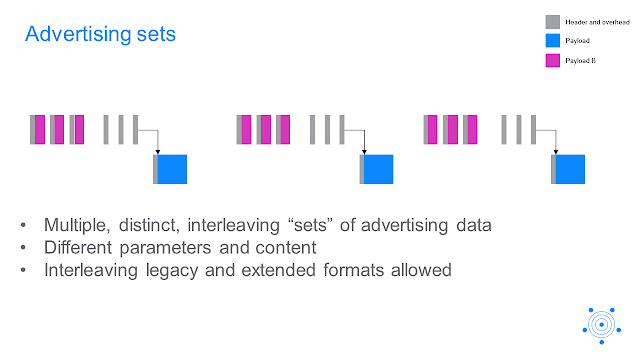 I looked at Bluetooth mesh briefly, focusing on the fact that Android developers can create applications for the monitoring and control of devices and systems in a Bluetooth mesh network, using something called the Proxy Protocol. 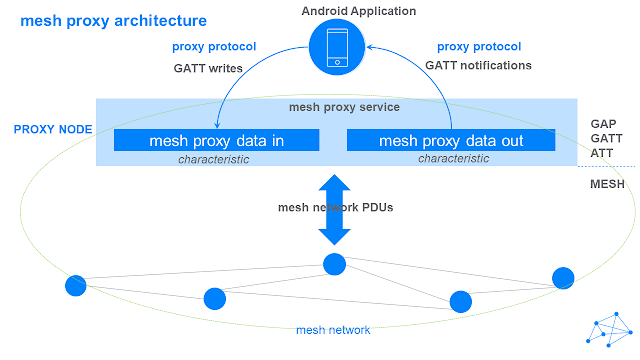 Finally, I talked about the future. Platforms and APIs always lag behind the Bluetooth specifications. There are a number of exciting new capabilities in the Bluetooth core specification which have been released over the last year or so, which we may see appearing on Android and other platforms at some point. Key amongst them are Direction Finding using AoD (Angle of Departure) and LE Audio, the new Bluetooth audio technology which uses Bluetooth LE rather than the older Bluetooth BR/EDR, has a higher quality codec, supports multiple concurrent content streams, private or public audio sharing via audio broadcast and is designed for hearing aids. And sitting under LE Audio in the Bluetooth core stack in a feature called Isochronous Channels, which has potential utility beyond audio use cases. It allows time-bound data to be communicated to multiple devices concurrently, but acted upon (e.g in the case of audio, rendered) simultaneously. 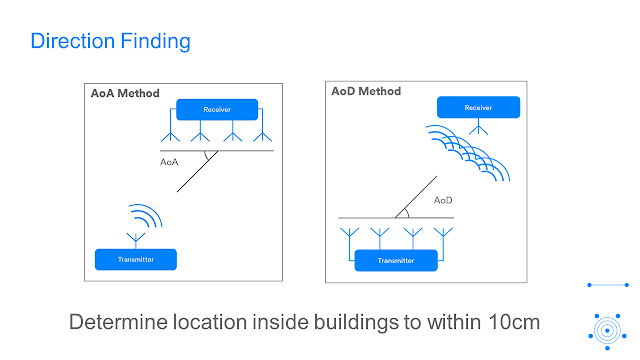 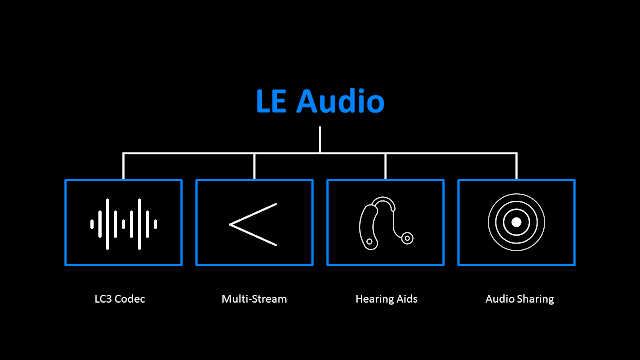 My presentation slides are here: https://drive.google.com/open?id=1lXK0s-g9EtA9kLSHeCTnAyosrf5XDDma

I'm going to be delivering a second talk, on Bluetooth mesh later in the year. Hope you can make it.

On Tuesday 26th March 2019, I was the keynote speaker at this event. I chose to talk about Bluetooth mesh but opened with some thoughts on what exactly the word "smart" might mean. How do we recognise the truly smart from the not so smart gadgets? And as a technical architect, how do I personally proceed in identifying the key issues leading to me making foundational smart home technology choices, which allow me to create a building which is smart today, but which can become smarter tomorrow as my requirements evolve and technology advances?

AmsterdamJS is a popular meetup for web developers, held regularly in.... you guessed it... Amsterdam. I was a speaker there on 6th December and gave a talk on Web Bluetooth with a little bit of Bluetooth mesh thrown in.

I *tried* to do a number of live demos... with mixed results! I was reliant on the event's very flaky Wi-Fi / internet connection, which unfortunately gave out on me and prevented me from showing my Bitty Software controller demo. I also got hit by a loose battery connection which stopped my first mesh demo working at the first attempt (and nearly gave me a heart attack!). After fiddling with the battery connector, it worked though. In fact the mesh demo worked mostly very well despite having traveled in the hold of the plane and having been very much bumped around. Anyway... here it is.

A couple of weeks ago, I was a speaker at the Embedded Linux Conference in Edinburgh. This is an *excellent* event... if you're into that kind of thing. Which I am.

I spoke about Bluetooth mesh and included a live demo of a "thing" I made and have been tinkering with for a while. As demos go... it's not bad but I still need to find the time to finish testing and implementing a few optimisations. Geting there though.

The demo is a 8 x 8 grid of BBC micro:bits, all running the Zephyr OS and with the Bluetooth mesh generic onoff server and generic level server models implemented (by me) on each. I control the grid, or specific parts of it, identified by the various group addresses I used, from another micro:bit acting as a generic onoff client and from a Web Bluetooth application via an nRF52 which is acting as a Bluetooth mesh proxy node.