Last night I attended and presented at the London Bluetooth Hardware Developers Group's November meetup. The group are a "small but perfectly formed" bunch, some with specialist interest in and experience of Bluetooth and others who are new to the subject. Given the mixed experience levels, I kicked off with a Bluetooth 101 for Developers before moving into my main presentation during which I walked through the Bluetooth Smart Starter Kit (SSK) V2, a fantastic resource for developers from the Bluetooth SIG. I've been working on V2 of SSK for a while and it should be released very soon, so this was a sneak preview for the attendees last night. SSK helps developers learn how to develop Bluetooth Smart applications for their preferred platform, be it Android, iOS, Windows Phone or BlackBerry 10 and it's based around an Arduino project where you get to build a custom proximity device which your smartphone application will work with. Watch this space (and Twitter) for news on the availability of SSK V2. 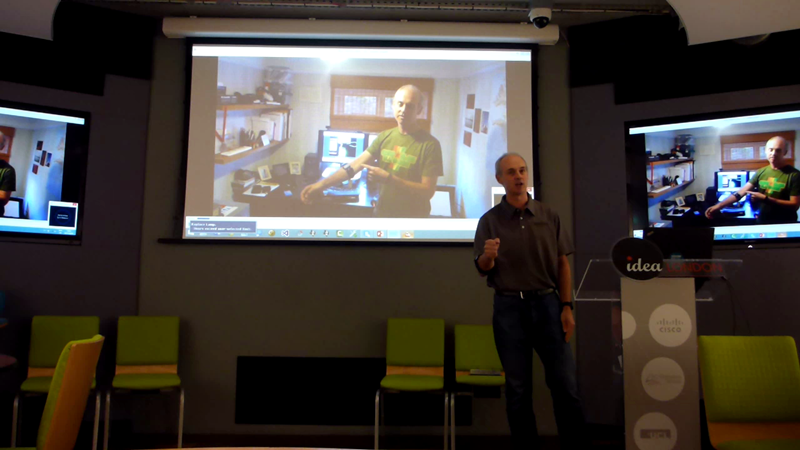 After my 1 hour session, the group's founder, Nick Brook, presented details of a project he's been working on which involves measuring the forces associated with motion and communicating them via a custom Bluetooth Smart service to an iPad application. The motion detection device was created using a Bluegiga development board, programmed with their scripting language, which resembles Basic.

Nick also gave a summary of the changes in Bluetooth 4.1 and an update on Apple's iOS 8, Home Kit and Watch Kit. Re: iOS 8, it now has a "suggested app" feature which will prompt the user to install an app that the OS thinks is relevant to some circumstance that has arisen. This is useful with respect to beacons. Apparently when loading an application to the App Store, you can provide a geofence definition which indicates the geographic region within which the application is relevant and can be used. Sounds very cool indeed.

You can download my presentation slides from here
By bluetooth_mdw - November 25, 2014